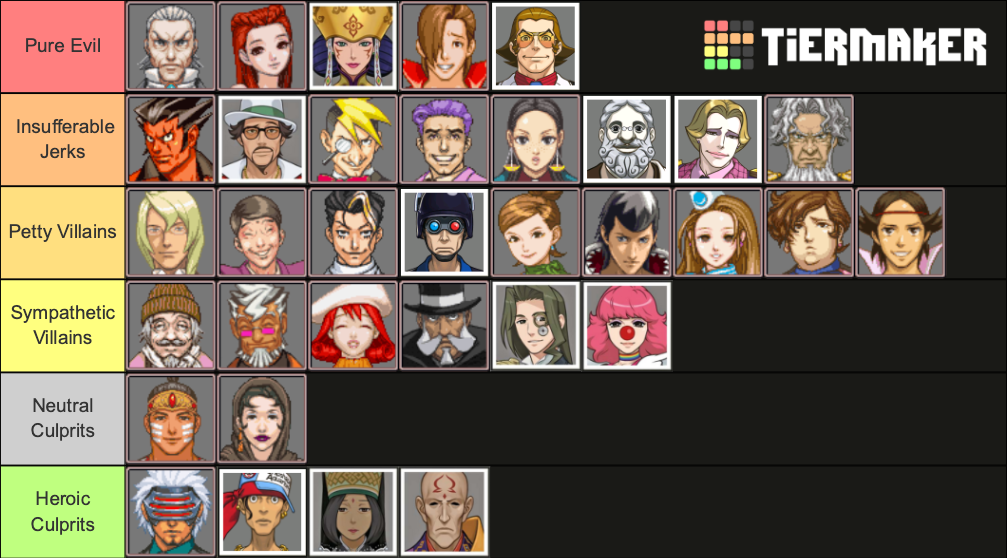 Pees'lub was not on the list, so I'll honorably put him in Petty

Maybe, but I put him in petty because all of this is over a poker game. Also the Phantom did a way worse version of that when he tried to kill Athena, since that failure made Athena think she killed her mother and traumatized her, without said petty motive.

I think the fact that Kristoph can murder a child over something that insanely petty puts him right in the pure evil category (I see the "petty" category as having no value for human life as long as they benefit from committing murder, and I see the "pure evil" category as those who murder solely for their own satisfaction), but that's my own interpretation. I just wanna ask.... please explain your thoughts behind which characters you put in the "sympathetic villain" category. Especially Gant.

Well I kinda felt sorry for Gant. He really just wanted to solve crime problems, but took it a bit too far and became the murderer he is. Mimi and Yogi lost a loved one due to the victim's actions, Magnifi lost his daughter, Geiru didn't get the job she wanted thus being unable to make her father proud, and Pierce lost his fiancee in a car crash. As for petty, I saw it as villains whose motives are so weak.

What do you think?