The Japanese cast assignments were announced at Jump Festa 2015 on December 19.[1] On November 14, 2017, Funimation announced the English dub cast for characters that appear in the first 13 episodes.[4]

The first season of the anime premiered in Japan on April 2, 2016,[5][6][7] with new episodes airing weekly on Saturdays until its final episode on September, 24, 2016. Outside Asia, the streaming site Crunchyroll provides two subtitled versions for online viewing on the same day for premium members, and one week later for everyone else; one version using the original Japanese character names and the other substituting them for the localized versions (e.g., "Phoenix Wright" instead of "Ryūichi Naruhodō").[8].

The second season of the anime premiered on October 6, 2018, with Crunchyroll providing a simulcast as with the previous season.[3] Funimation began streaming a dubbed version on October 30, 2018.[10] 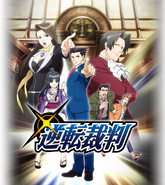 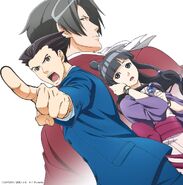 Key Visual for Season 2
Add a photo to this gallery

Differences from the gamesEdit

Retrieved from "https://aceattorney.fandom.com/wiki/Ace_Attorney_(anime)?oldid=150143"
Community content is available under CC-BY-SA unless otherwise noted.