In December 2016, it was ported to iOS and Android smartphone platforms as Apollo Justice: Ace Attorney HD with updated character graphics in a similar manner to Phoenix Wright: Ace Attorney Trilogy HD.

The game was also released for Nintendo 3DS in November 2017, where it was exclusive to the Nintendo eShop outside of Japan. This version featured updated graphics (including stereoscopic 3D compatibility) and sound in a similar manner to Phoenix Wright: Ace Attorney Trilogy.

Apollo Justice: Ace Attorney is set seven years after the events of Phoenix Wright: Ace Attorney - Trials and Tribulations. It stars a new protagonist, Apollo Justice, an upcoming rookie attorney working for Kristoph Gavin at Gavin Law Offices. After a series of events, he comes to work for a mysteriously disbarred Phoenix Wright (now a gambler and piano player) and his magician daughter Trucy. He also meets Klavier Gavin, an easygoing rock star who moonlights as a prosecutor who acts as Justice's main rival. Over the course of the game, Justice and Trucy (who inserts herself as Apollo's "assistant") investigate and solve crimes in an effort to achieve a "Not Guilty" verdict for their clients in court.

Apollo Justice: Ace Attorney features the lowest number of returning characters in the Ace Attorney series to date, with only seven characters from previous games making a reappearance.

Apollo Justice: Ace Attorney retains the standard investigation and courtroom trial gameplay from the original trilogy, with the addition of several new 3D elements and forensic science investigations. Each case introduces a new gameplay mechanic for the player to use, including making shoe prints and finding fingerprints in episode 2, using a sound mixer in episode 3, and using an x-ray machine in episode 4. The game also allows all evidence to be viewed in 3D, a feature carried over from Rise from the Ashes, which was also made with the Nintendo DS in mind. A more subtle similarity between Apollo Justice: Ace Attorney and Rise from the Ashes is that there are no episode selection images to be unlocked after each episode's completion on the original Nintendo DS release, though subsequent releases have them. This is the only game in which this is the case, though fellow DS titles Ace Attorney Investigations: Miles Edgeworth and Gyakuten Kenji 2 are rather minimalist in their episode selection images, each depicting a major character on a generic background.

Like Phoenix Wright and his magatama, Apollo Justice has his own power to use during cross-examinations. When a witness is tense or unsure, Justice can perceive it through the use of his bracelet. Because of the bracelet's special material, it tightens around his wrist, allowing him to accurately sense a witness's nervous habits. During certain cross examinations, the bracelet icon on the top of the bottom screen will slowly spin to indicate that the player must use it, and the player must choose the correct statement to focus on by pressing the bracelet button (emulating Justice touching his bracelet to focus). When Justice focuses on a witness, he is able to watch a statement in slow-motion and inspect the witness in a zoomed in state. When the player finds the witness's habit, pressing the Perceive button will cause Justice to yell "Gotcha!", a new voice bubble exclusive to Justice. Afterwards, Justice must present evidence to discern the meaning of the habit, and why the witness may be nervous about it. Subsequent games involving Justice would limit his bracelet use to investigations and some special circumstances in trials.

The Nintendo 3DS version has the option to play both the English and Japanese versions of the game, as well as an additional save button on the 3DS touch screen. Unlike the original version, which could not save while on the title card for a Testimony/Cross-Examination, the save function can now be used at any time except while breaking Psyche-Locks or while in the Jurist's Chambers at the end of the game. The 3DS version also added the option to disable fast-forwarding on dialogue that the player has not yet read, which was previously used in Phoenix Wright: Ace Attorney: Spirit of Justice, though the button for this option is removed upon the completion of Turnabout Succession.

A demo of Apollo Justice: Ace Attorney was briefly available to download from the Wii on to the Nintendo DS, or playable through an embedded Flash version on the Ace Attorney website. The demo covers a short section of Turnabout Trump, specifically Phoenix Wright's cross-examination segment. When the player progresses beyond the content in the demo (after the player first successfully presents evidence), Apollo Justice strains his vocal cords from yelling and loses his voice. After this point the demo ends with Justice being assured that it was only a mock trial, and the player being told to buy the full game to solve the mystery. As well as that, a slightly different version of this demo was also available for download from a DS kiosk. This demo features slightly different versions of "Apollo Justice - A New Chapter of Trials!" and "The Truth Revealed 2007".

Originally, Shu Takumi, the creator of Ace Attorney, felt the series should not continue after Trials and Tribulations, stating that he felt Phoenix Wright's story was over. When it was decided that Ace Attorney 4 would go ahead, Takumi made the decision that the game should feature a new protagonist[1]. However, Takumi was told to include Phoenix Wright by Capcom executives[2], as well as to implement Japan's new lay judge system.[3]

While deciding on the new protagonist for the series, one of Shu Takumi's first suggestions was to have the judge become the main protagonist due to his popularity. However, this concept was discarded for someone more youthful.[4] This design went through multiple iterations, drawn by artist Kazuya Nuri. Some of the early concepts include a prominent scar on the protagonist's forehead, and a formal suit - which went through various different color concepts, such as green and black. The planners unanimously voted for red as the final design.[5][6]

While designing the character of Apollo Justice, Takumi found difficulty in creating a whole new protagonist, stating that "the most natural parts of me had already all been used up by the Phoenix Wright character. So I tried to take everything about Phoenix and turned them upside-down. With this great turnabout, I came up with Apollo: a character who is aggressive, passionate, and youthful." This same principle was used for designing Trucy Wright, who was designed as the "opposite" of Maya Fey.[7]

An early character concept for Trucy Wright was a "ninja-girl-in-training". While the developers thought it had "impact", it was rejected quickly - which Mitsuru Endo attributed to his rough drawing of the concept.[8]

Early in Apollo Justice: Ace Attorney's development, a concept named "The 3D Witnesses Project" was proposed to move the series away from its 2D roots. However, because of "various reasons", the team decided to move forward with an evolved version of Ace Attorney's 2D presentation.[8] However, 3D elements were still included in the game, through "The 3D Crime Scene Project", an idea that Mitsuru Endō had wanted to implement into a game for ten years before the development of Apollo Justice: Ace Attorney.[9]

Some early concepts the planners of Apollo Justice: Ace Attorney had considered before deciding on the bracelet mechanic used in the final game included showing the trajectory of bullets in 3D, reconstructing a suspect's face, or seeing the monetary value of testimony and evidence. Another early concept for the game included showing the Perceive mechanic in full color, before it was changed to be only black and white.[10]

While working on the soundtrack for Apollo Justice: Ace Attorney, composer Toshihiko Horiyama had struggled with writing the song "Guilty Love", the theme of Klavier Gavin. Initially, he had written a catchy J-pop style tune, but was quickly rejected by Shu Takumi. After the song was rejected, Horiyama had a strange dream in which, while waiting for a bus, a woman who was "exactly [his] type" arrived. The two sat down on a bus together, which soon arrived at a tonkatsu restaurant. While the two were eating, the woman asked about Horiyama's struggles with Gavin's theme. After he had said yes, a waiter brought a computer and a music program for the woman to begin writing the song for Horiyama. She finished writing the piece, which was now a hard rock song, and left to go back to her husband. Horiyama woke up, and began writing "Guilty Love", trying to remember the song the woman had presented to him. After showing it to Shu Takumi, who accepted it, Takumi gave the song its official name a few days later.[11]

There was a collaboration with the Japanese Ministry of Justice for promoting the game, and there was a presentation of the game at the ministry's head office due to the inclusion of the lay judge system.[7]

After release in Japan, Gyakuten Saiban 4 has been highly praised, with Famitsu giving it a 9/9/9/9 score (36/40), and selling around 250,000 copies during the first retail week, according to Media-Create. Six weeks after its release, Capcom announced that they had shipped 500,000 copies, accounting for 25% of the series' two million units worldwide. 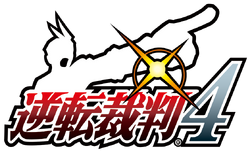 Key visual for the game.

The cast of Apollo Justice gaming. 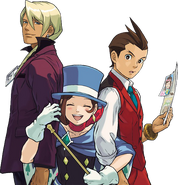 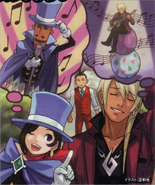 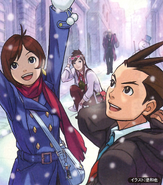 Apollo, Trucy, Ema, and Klavier in the snow (Odoroki Gyakuten) 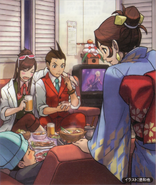 Apollo, Trucy, Ema, and Phoenix having a party (Odoroki Gyakuten) 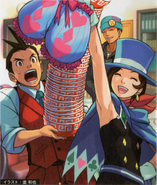 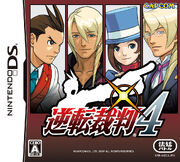 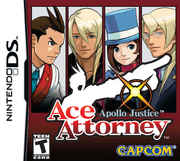 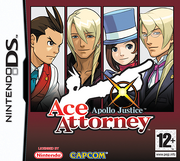 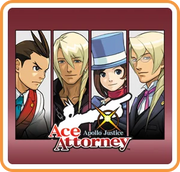