At first glance, Means appeared to be a benevolent teacher, genuinely interested in seeing justice made (although Athena Cykes found his policy that "the end justifies the means" somewhat disturbing). He possessed a large, somewhat unnerving grin, which he tended to flash when disagreeing on something.

In actuality, Means' benevolence was a façade. He was not above accepting bribes for good grades or falsifying evidence to secure victory for himself. He also viewed the "dark times of the law" as a boon to the legal profession and even "beautiful", since his philosophy was a matter of routine. When cornered (and having his ruthless view of the law criticized), Means would fashion his hair into a structure similar to an ancient Greek war helmet; at this point, he would become belligerent, condescending, and downright malevolent; he employed a ruthless psychological attack on Athena Cykes, causing her to doubt herself to the extent of nearly losing a case, which only failed due to the intervention of Apollo Justice, Robin Newman, Hugh O'Conner, Juniper Woods, and Simon Blackquill. 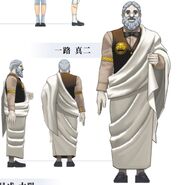 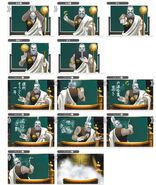 Retrieved from "https://aceattorney.fandom.com/wiki/Aristotle_Means?oldid=59570"
Community content is available under CC-BY-SA unless otherwise noted.