The District Court in Los Angeles contains at least nine identical courtrooms. These are the main battlegrounds for defense attorneys and prosecutors. During a trial, the defense attorney argues his or her case against the prosecutor by cross-examining the prosecution's witnesses, usually to find information that contradicts the facts (due to perjury or forgetfulness on the witness's part), though other purposes can be fulfilled in this way as well. Trials are conducted as bench trials, which means that the judge who presides over these trials can freely render the verdict. Under the Jurist System in Vera Misham's murder trial, the judge could still hand down guilty verdicts based on accumulated penalties, but otherwise, final judgment was given to a six-member jury to make by consensus.

Courtroom No. 1 was used for the trials of Maya Fey and Phoenix Wright for the murder of Mia Fey.

Courtroom No. 2 was used for the debut trials of Phoenix Wright and Apollo Justice, as well as Mia Fey's second trial, all against prosecutor Winston Payne. They are included in the following:

Courtroom No. 3 was used for some pivotal trials for Phoenix Wright, including his only official loss. The trial of Machi Tobaye for the murder of Romein LeTouse led to a trial held under the revived Jurist System, namely the trial of Vera Misham for the murder of Drew Misham. These trials are included in the following:

Miles Edgeworth visited Courtroom No. 3 while investigating the murders of Byrne Faraday and Mack Rell in Defendant Lobby No. 2, which had caused Rell's trial to be canceled. He questioned the judge on what he had heard as he was using a restroom within earshot of the murders.

Courtroom No. 4 was used for the following trials, including Mia Fey's as well as Athena Cykes' first trial:

Courtroom No. 4 was bombed during Starbuck's trial, which severely damaged it, however it was restored 5 months later. It also served as a crime scene in and of itself when Apollo Justice was attacked there.

Courtroom No. 5 was used for the following trials, including the Mask☆DeMasque trials:

Courtroom No. 6 was used in the following trials, including the Mask☆DeMasque trials (along with Courtroom No. 5):

Courtroom No. 7 was used in the last two trials of Phoenix Wright prior to his disbarment, namely:

Courtroom No. 8 is not known to have been used by Mia Fey, Phoenix Wright, Apollo Justice or Athena Cykes.

Courtroom No. 9 was used in the trial of Lana Skye for the murder of Bruce Goodman.

Each courtroom contains two long tables at ground level, a semicircular podium situated between them, an elevated desk opposite the podium, and seating areas behind the tables. Stanchions connected by ropes are placed on the ends of the tables and around the back of the courtroom to outline specific areas. A large crest depicting the Scales of Justice is displayed above the judge's bench. 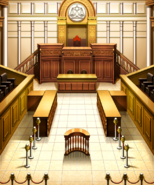 Isometric view of the courtroom

The witness stand (facing the judge)

Positioned in front of the judge's area is a desk with two chairs, but these have never seen use in any known trial. By 2026, this table was removed from the courtroom.

Isometric view of the courtroom

Concept art of a courtroom.
Community content is available under CC-BY-SA unless otherwise noted.
Advertisement