Florent L'Belle is the personal aide of Damian Tenma. L'Belle had his own private line of beauty products called "Je suis L'Belle!", which were for his private use only, despite advertising for them on television. L'Belle's shoulderpads are actually twin golden cellphones he uses to answer calls from his business partners.

L'Belle was an incredibly vain, self-centered, and flamboyant character. Most of his personality revolved around an obsession with external beauty; he wore garish designer clothes, heavy makeup, and dyed his naturally gray hair in different vivid colors. He believed that his products should be known to the world, although he wouldn't release them to the general public. He also had a habit of emphasizing random words in his sentences. 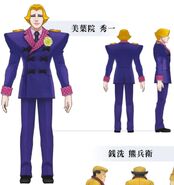 Retrieved from "https://aceattorney.fandom.com/wiki/Florent_L%27Belle?oldid=59556"
Community content is available under CC-BY-SA unless otherwise noted.