Since the 2021 release of The Great Ace Attorney Chronicles, Gyakuten Kenji 2 is the only main game in the series to remain a Japan-only title. On March 18, 2011, during a live streamed Q&A session with Capcom employees, upon being asked whether "Ace Attorney Investigations 2" would be released outside of Japan, Christian Svensson (then senior vice president of Capcom USA) replied, "No. Sorry about that."[1] He later clarified on Capcom's forums, "The costs of localization [on the Nintendo DS] are higher than the forecasted return. [...] I realize there are fans who would like to have this and I'll be sure to explore ways that could happen viably in the future with our strategy and R&D teams but no promises."[2] In the wake of petitions to have the game localized, Svensson mentioned that niche titles like Gyakuten Kenji 2 could be good candidates for digital distribution.[3] Svensson reportedly attempted to convince Capcom to greenlight Ace Attorney Investigations 2 for another medium,[4] but left Capcom on July 11, 2013 due to staff reorganization.[5] In lieu of an official release, an unofficial English patch of the game has been developed under the name Ace Attorney Investigations: Miles Edgeworth - Prosecutor's Path.[6]

Gyakuten Kenji 2 features a new gameplay element called "Logic Chess". When interrogating a person who refuses to testify, the background changes to a chessboard with chess pieces, as if Miles Edgeworth and the other person were in a mental chess match. Similarly to the magatama feature in Phoenix Wright's games, this feature is used to pry secret information from various people. However, instead of just presenting evidence, the player is presented with two or more options at each decision prompt.

There is a time limit to this mental exchange; when it expires, the opponent will change his or her mind and not entertain Edgeworth further. This emphasizes the need to analyze the situation quickly and adapt to each opponent's personality. For example, against a cautious opponent, one may want to ask a question that they are guaranteed to answer. Through this, Edgeworth can slowly gain information needed to "win".

When the opponent makes a suspicious statement, a chess piece icon appears next to one of the choices, marking it as the critical "move" to make to knock out one of the opponent's pieces. Edgeworth can either choose to pursue this or choose to wait to get into a better "position" in the "game". By choosing incorrectly (i.e., waiting for too long or striking too soon), Edgeworth risks incurring a penalty to his time limit.

The story mainly revolves around Edgeworth's struggle to determine the meaning of his job in relation to finding the truth behind a collection of cases. This is exacerbated when he becomes a target of the so-called "Prosecutor Purge", an inquisition conducted by the Prosecutorial Investigation Committee intended to weed out and replace prosecutors who are judged to be incompetent or acting inappropriately. Judge Justine Courtney is mysteriously sent to cases that Edgeworth is investigating and attempts to replace him with a younger, less competent prosecutor named Sebastian Debeste. Edgeworth himself risks his badge in order to continue his quest for the truth. In the meantime, he faces a personal conflict when he meets Raymond Shields, a defense attorney who used to be an assistant to Edgeworth's father Gregory Edgeworth and has taken over the Edgeworth Law Offices after his death. Shields offers the younger Edgeworth the chance to follow in his father's footsteps and become a defense attorney.

Dick Gumshoe's age is given as 32 in the Tokyo Game Show demo, and the demo case occurs on March 25, which puts the full date of the first case at March 25, 2019, ten days after Turnabout Ablaze.

At Tokyo Game Show 2010, a demo of the first case was available. This demo became playable on the official website in December 2010.

In March 2011, Capcom's Christian Svensson stated that there were no plans at the time to release Gyakuten Kenji 2 in regions outside of Japan. In an interview with Siliconera in December 2011, Svensson stated that the potential for a downloadable, digital release of Gyakuten Kenji 2 exists, but that he couldn't say that it definitely would happen, and that "conversations are ongoing internally about how to address the audience that's clamoring for more Ace Attorney goodness".

In a live "questions and answers" video in January 2012, Svensson again said that he had not given up on trying to get Gyakuten Kenji 2 released in the West, that conversations remained ongoing, and that he was "cautiously optimistic that some day, that content will exist in the West in some form." In March 2012, he once again said that an English release of the game was "an open discussion point", and that he hoped that "the fans are still patient with us".

In August 2012, a Capcom employee said that if Phoenix Wright: Ace Attorney Trilogy HD, an iOS remake of the first three Ace Attorney games, was a success, it would increase the chances of getting Gyakuten Kenji 2 localized.

In September 2012, when asked if high sales of Phoenix Wright: Ace Attorney HD Trilogy and the then upcoming Nintendo 3DS title Gyakuten Saiban 5 (later localized to Phoenix Wright: Ace Attorney - Dual Destinies) would help sway a decision about localizing Gyakuten Kenji 2, Christian Svensson said that the game "isn't being held hostage so please don’t read this that way but if they do well, they certainly can’t hurt". He also added that the sales forecasts for Gyakuten Saiban 5 were high compared to how well previous entries in the series had done commercially, which was necessary in order to get it released in the West.

In September 2013, a GBAtemp user named "Auryn" released the first English translation patch for the game. The initial patch translated the first two cases, with a second patch containing a fully translated third case late released in March 2014. In June of the same year, an update with the two other cases were released, with additional information stating that the developer would try to optimize the patch size on a later date.[6] On June 14th, 2014, the full patch was released.[10]

Sega built a theme park attraction called Gyakuten Kenji in Joypolis (逆転検事 in ジョイポリス) in its Joypolis theme park, which is dedicated to the Gyakuten Kenji games. Each visitor is given around 20 minutes to investigate a crime scene and look for clues.[12]

The file used to run Gyakuten Kenji 2 contains some anti-piracy measures that detect the legitimacy of the file and attempt to impede the gameplay if the file is deemed unauthorized. Unauthorized game files are typically ROMs ripped from the game cartridge. For this game in particular, dialogue text is converted into an unreadable font normally reserved for the Borginian fictional language, and organizer descriptions are replaced by Xs. The unofficial English fan patch overrides these measures. 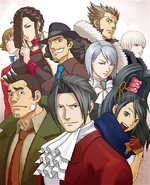 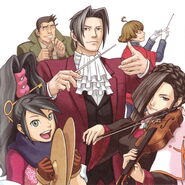 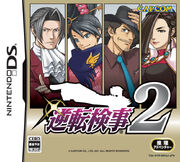 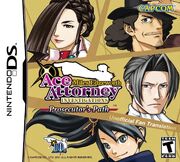