Gyakuten Saiban: The Truth Reborn (逆転裁判 −蘇る真実; lit. "Turnabout Trial - Truth Resurrected") is the first of three musicals based on the Ace Attorney video game series. A collaboration between Capcom Japan and the Takarazuka Revue, an all-female musical theater company, the show starred Cosmos Troupe's Tomu Ranju in the lead role. This was the first time that the theater troupe had collaborated with a game company, according to one of the performance pamphlets. The production was first showcased in February 2009 to a very positive reception, with tickets selling out on the first day[1]. This success led to a a sequel being created. Allegedly, the musical's director cleared each of the first four Ace Attorney games seven times before sitting down to write the script[2].

Although the show is a Japanese production, it uses the names from the English localizations of the games (e.g., Phoenix Wright instead of "Ryuuichi Naruhodou"). The Takarazuka Revue's Chairman states in his message in the program book that the musical takes place in America. The plot itself is heavily based upon that of Rise from the Ashes, but changed so that it is more personal to the lead character, Phoenix Wright.

In New York, Phoenix Wright was thinking about his former lover Leona Clyde, when a news bulletin came on saying that Senator Robert Cole had been murdered and that Clyde was the main suspect. Knowing she would never do such a thing, he immediately goes to visit her at the Detention center. In their initial meeting, Clyde acts very distant and explains to Wright that people change, insisting that she is indeed guilty. However, his belief in her innocence is unwavering and he takes up her defense against the undefeated genius prosecutor, Miles Edgeworth.

As the trial continued, it was revealed that Leona Clyde had tampered with the evidence, as her sister Monica had been at the scene of the crime. However, Wright eventually exposed the culprit to be none other than Leona's employer: Governor Miller Arthur.

After the trial ended, Leona still went to jail, as she tampered with the crime scene. Wright declared that he will wait for her and confessed his love for her, to which she responded by running into his arms with tears in her eyes.

The background music and sound effects used were arranged by the Revue based on Noriyuki Iwadare's orchestra score[3]. The following are the main musical numbers created just for the show in the order that they appear:

Differences from the game[]

The plot of the musical is largely inspired by the events of Rise from the Ashes with some notable differences:

References to the games[]

In Act I, the news bulletin announcer's mug features an image of the coffee-loving prosecutor Godot from Phoenix Wright: Ace Attorney: Trials and Tribulations. At another point, Maya Fey makes a mug of coffee that reads "Godot blend no. 107" on the side. 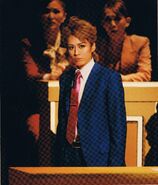 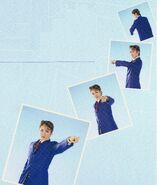 Photos of the supporting cast[]