Hugh O’Conner is a cool-headed and confident third-year student at Themis Legal Academy, where he is studying to become a defense attorney. Often seen reading through the Six Laws Compendium, he is considered a genius by many of his fellow students, since he is deemed a perfectionist by his perfect scores. O’Conner is considered an ace of the school's archery club and normally carries a bow around with him.

However, he has a habit of looking down on others and is said to point an arrow at those who oppose him. He is friendly with judge student Juniper Woods, and there are rumors at the school that he is involved in a love triangle for her affections with hot-headed prosecutor student Robin Newman. 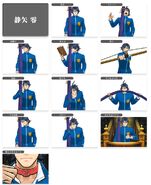 Retrieved from "https://aceattorney.fandom.com/wiki/Hugh_O%27Conner?oldid=59557"
Community content is available under CC-BY-SA unless otherwise noted.