Marlon Rimes is an aquarium trainer. He appears to be scrawny at first, but he had a more muscular alter ego who makes a debut in trial after swallowing a bucket of fish.

He likes rapping so much that he will often rap when describing his own feelings. In court, it is revealed that he is actually a rapper. He raps when he testifies. 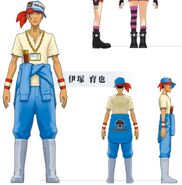 Retrieved from "https://aceattorney.fandom.com/wiki/Marlon_Rimes?oldid=60661"
Community content is available under CC-BY-SA unless otherwise noted.