Phantom was an international spy working for an unknown organization. His true identity was unknown as he was a master of disguise. Using his abilities, he managed to impersonate the deceased Bobby Fulbright so any evidence of his identity and him killing psychologist Metis Cykes can be erased.

Phantom is a skilled actor and a master of disguises, to the point where he never actually reveals his true face beyond his collection of masks, instead speaking through his impersonations of others, favoring Phoenix Wright after his identity theft of Fullbright is revealed (given how Wright was interrogating him in court at the time, this was likely an intimidation tactic). He also has a fondness for spy gadgets (including a grappling hook and a jamming device he uses to confuse Athena Cykes' Mood Matrix), many of which are built into his watch.

He is an emotionless person by nature, and this fact would be used against him. After finally being cornered by the defense, the Phantom reveals some of his remaining humanity by expressing immense fear, tearing off his masks one by one and questioning who he ultimately was.

At the end of his breakdown, he was shot by an unknown sniper. However his wound was not fatal, and Phantom was finally arrested, bringing closure to the UR-1 incident. 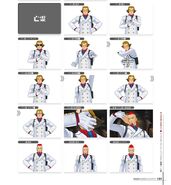 Retrieved from "https://aceattorney.fandom.com/wiki/Phantom?oldid=59569"
Community content is available under CC-BY-SA unless otherwise noted.