You may be looking for the character, the anime adaptation, the live action film, or the franchise in general.

The Nintendo DS remake, Gyakuten Saiban: Yomigaeru Gyakuten was released in Japan on September 15th, 2005 with an additional case. This remake was also localized, translated, and released internationally as Phoenix Wright: Ace Attorney. This version uses the microphone and the touchscreen of the DS as alternatives to the button-based control methods from the original GBA game. For example, the player can select options by touching them like buttons, and the player can press witnesses or present evidence by holding Y and shouting "Objection!", "Hold it!" or "Take that!" into the microphone. The Japanese versions have dual language options in Japanese and English, and the European version has translations for multiple European languages.

The game was brought to the Nintendo Wii as a downloadable title via WiiWare; its build based upon the 2006 European DS release of Phoenix Wright: Ace Attorney. It was released in Japan on December 15, 2009, and in the US on January 11, 2010, consisting of the first four cases with Rise from the Ashes was released separately on March 16, 2010 in Japan, and on May 24, 2010 in the US. The releases cost 900 and 300 Nintendo Points respectively; for the US release, these costs were changed to 1000 and 100 Nintendo Points respectively.

The game has also been ported to the iOS and was released on May 24, 2010 in the App Store with all cases that were included in the DS edition. The game had a revamped control system, but was otherwise a straight port. The game is also featured as part of Phoenix Wright: Ace Attorney Trilogy for the Nintendo 3DS, which includes the game along with the two other original trilogy titles.

Rise from the Ashes[]

Key visual for the main game

Group artwork for the game

Key visual for the Nintendo DS version, focusing on Rise from the Ashes 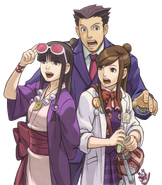 Group artwork for Rise from the Ashes 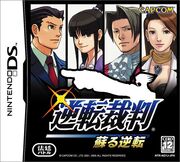 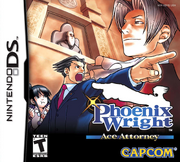 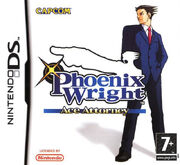