Phoenix Wright: Ace Attorney - Dual Destinies (逆転裁判 5, Gyakuten Saiban 5; lit. "Turnabout Trial 5") is the fifth installment of the Gyakuten Saiban series, and the eighth title overall in the Ace Attorney series of text adventure video games. Dual Destinies takes the main series to the Nintendo 3DS for the first time, preceded by the title Professor Layton vs. Phoenix Wright: Ace Attorney. Phoenix Wright returns as the main protagonist, and his design has been changed to reflect his maturation and greater sense of comfort compared to his last cases as a lawyer eight years prior. Dual Destinies features a 3D environment, instead of the 2D sprites and backgrounds of previous games. The game also features a fully orchestral soundtrack.

Motohide Eshiro returned as producer, Takeshi Yamazaki was the scenario director, and the soundtrack was composed by Noriyuki Iwadare. Yamazaki took over the role of series creator Shu Takumi, who was at that time busy working on Professor Layton vs. Phoenix Wright: Ace Attorney. Another notable absence was regular character designer Tatsuro Iwamoto, who opted to take a break from the series and was replaced by Takuro Fuse.

The physical release of the game in Japan came in four configurations:

The second and third bundles also included alternative cover art featuring different characters from the main design, chosen from a pool of three designs. Buying the fourth bundle would entitle the buyer to all three alternate cover arts.

A port for the iOS platform was released in Japan on August 7, 2014 as an episodic package with all content from the 3DS version being present (including the Japan-exclusive quiz downloadable content). It was released in North America and Europe a week later on August 14, 2014. It was later ported to Android devices in 2017.

Phoenix Wright: Ace Attorney - Dual Destinies takes place roughly one year after Apollo Justice: Ace Attorney, with Phoenix Wright regaining his attorney's badge. The plot has a darker theme than previous games in the series, in accordance with Wright's warning in Turnabout Trump, "A dark time is coming for our legal system. [...] We have to set it right". However, it has the same overall light tone of the other games.

The legal system is bound by the "dark age of the law", a mentality that has shattered the public's trust in the courts, sparked by controversial events that took place seven years prior. Lawyers on both sides have resorted to numerous unethical and illegal tactics in order to ensure that they come out on top, no matter what the implications, and false charges are commonplace. However, with the suspicions and accusations of fraud that have followed Phoenix Wright for the past seven years put to rest, the Wright Anything Agency is ready to move forward into a new era, aided by a new face who has just joined the firm.

The classic courtroom gameplay of the Ace Attorney series returns with some changes. The game world has transitioned into 3D with fully orchestral music, allowing for dynamic camera angles and more freedom in animations while retaining the 2D "touch" of the characters by taking measures to maintain the sense of speed and sharpness from the 2D games. The 3D transition also allows the player to look at rooms from different angles during investigations. In addition, the game features animated scenes by the anime studio Bones, similarly to Professor Layton vs. Phoenix Wright: Ace Attorney. The various sound effects common to the series have also been modified for the transition to the 3DS.

Dual Destinies also makes use of special powers possessed by the protagonists. Phoenix Wright's magatama and Apollo Justice's bracelet return from previous games, although unlike in Apollo Justice: Ace Attorney, the bracelet is mainly used in investigations rather than trials. Athena Cykes employs the "Mood Matrix" to examine the emotions of a witness and find contradictions between their emotional state and testimony. Another new gameplay mode is "revisualization", in which the player character reviews the known facts and builds up a train of thought to reach a conclusion. The player is presented with a series of facts of many kinds, such as items and evidence connected to the case, and must choose the correct one to advance the reasoning towards a final conclusion.

Changes to the formula[]

Dual Destinies shares several features with Professor Layton vs. Phoenix Wright: Ace Attorney. This includes a touchscreen button that takes the player to the save menu, a function previously accessible only through the "Start" button. Additionally, multiple save files can be recorded onto a single game copy, though in this case only two files can be made. Scenes being examined remain on the top screen, and the touchscreen functions as a trackpad to move a cursor around the scene (the circle pad can also be used).

The game also includes several new features and modifications to existing features to make the fundamentals more accessible. A backlog function that allows players to review previous dialogue can be viewed at any time with a touchscreen button or the "Y" button. The fast-forward function, previously only available when going through repeated dialogue, can now be used to go through any dialogue. In the main menu, episodes are divided up into chapters, and a "Chapter Select" option allows the player to jump to the beginning of any chapter that has been cleared.

The court record has also undergone an overhaul. In addition to the evidence and profiles, an investigation memo titled "Notes" lets players keep track of tasks that need to be fulfilled during investigation segments. All three are accessible as folder tabs at the top of the touchscreen, and they can be scrolled through with the shoulder buttons. The evidence and profile folders show the overview from the Nintendo DS games at the bottom of the screen, and a detailed view of a cursor-highlighted item appears above the menu, removing the need to select an item explicitly in order to view its basic information.

The penalty system is only used in trial segments of the game. When the penalty bar depletes, rather than having to start over from a save point, the player has the option to continue where they failed, with the penalty bar fully restored. Moreover, if the player incurs three penalties or is forced to restart during a cross-examination, the player can press the "Consult" (X) button that appears, at which point the game indicates which segment of the testimony to examine.

Unlike in prior games, only text that the player has already read can be skipped, even in episodes that have been cleared.

Series creator Shu Takumi originally intended for the series to end at Phoenix Wright: Ace Attorney - Trials and Tribulations and later Apollo Justice: Ace Attorney. However, he later expressed in interviews that he was reconsidering his decision to end his involvement in the series due to the positive fan reaction that the series has gained over the years.[1] In one particular interview with VideoGamer.com at E3 2010, Takumi expressed an interest in taking the Ace Attorney series to the Nintendo 3DS, Nintendo's newest portable game console.[2] This eventually came to fruition with Professor Layton vs. Phoenix Wright: Ace Attorney.

In a Famitsu interview, Eshiro and Yamazaki talked about the gameplay and plot and speculated on Maya Fey's whereabouts during the game. Yamazaki posited that she was training at Kurain Village, which seemed to imply that she would not feature heavily in the game, with a new character playing her role as the partner character. This new assistant, later revealed to be Athena Cykes, was said to have been difficult to design, looking almost alien-like at first, though the color yellow was always a theme.

On the move to 3D, Yamazaki explained:

Tokyo Game Show 2012 featured a 15 minute demo. This was added to the Japanese official website in May 2013.

At the Nico Nico Chokaigi 2013 event, another demo was released.

An English version of the demo was playable at E3 2013. On October 1st, 2013, it was made available on the Nintendo eShop.

Free downloadable costumes were available in Japan until a month after the game's release. The costume pack includes the Old-School Suit, Phoenix Wright's old suit and appearance from the first three games; the Stylin' Street Clothes, a new casual outfit for Apollo Justice by character designer Kazuya Nuri; and the Themis Academy Uniform worn by female defense cadets, a sailor fuku for Athena Cykes. In addition to this is a downloadable extra case called Turnabout Reclaimed. This content is also available for the American version of the game. If the game was bought from the eShop from October 24, 2013 to November 7, 2013, the player will get access to the outfits for free. However, if bought after November 7, 2013, the costume bundle must be purchased separately.

Another downloadable costume is the Nostalgic Sweater, the old outfit Wright wore during Turnabout Memories. The outfit is a reward for completing the extra quiz DLC. In the English version, this outfit is unlocked upon the player completing the DLC case, Turnabout Reclaimed.

Following suit with Professor Layton vs. Phoenix Wright: Ace Attorney, the music used in Dual Destinies is almost entirely from its own soundtrack. That is, almost every music track used in the game is either original or a re-imagining of a track from a previous game, with even "Suspense" being replaced by "Suspense 2013". Nonetheless, Dual Destinies uses "Guilty Love" and "Surging Eyes" unaltered from the soundtrack of Apollo Justice: Ace Attorney.

In August 2013, Niconico conducted a character popularity poll. The following ranking was posted during a live stream (English names used here for all characters other than characters who are exclusive to Gyakuten Kenji 2; the top 8 and Athena Cykes are in bold):

Another poll was conducted during the live stream between the top 8 plus Athena Cykes:

Cover art image from the artbook 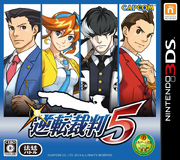 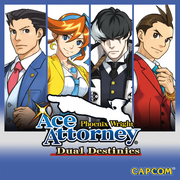 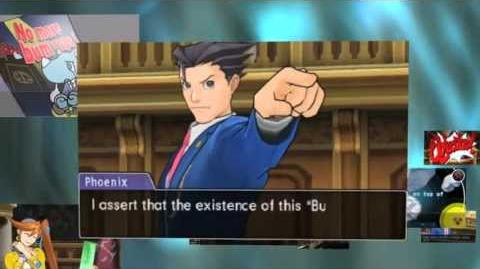 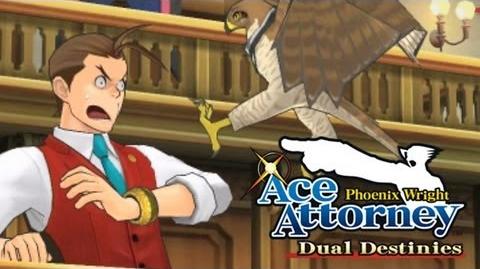 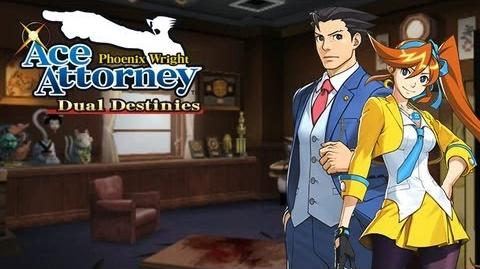 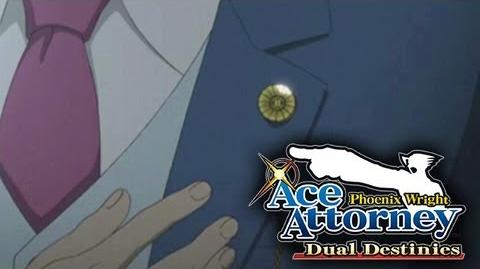 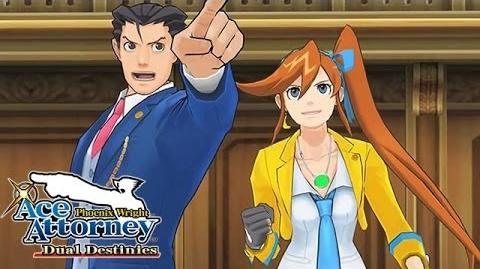 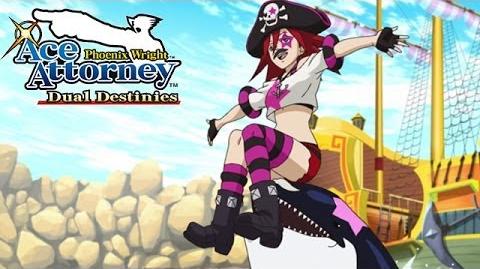