All gameplay elements from Phoenix Wright: Ace Attorney are carried over for Justice for All. This includes the two phases of gameplay, investigations and trials. In investigations, Wright has the ability to move to or examine various locations, and talk or present evidence to witnesses. The player now also has the ability to present profiles to witnesses, a feature not included in Phoenix Wright: Ace Attorney. In trials, gameplay mostly consists of witness testimony and cross-examinations. When a witness testifies, the player will then have to cross-examine the witness, which means either pressing a statement for more information, or presenting evidence that contradicts the testimony. Presenting evidence during cross-examinations is most often the only way to progress in trials.

During Reunion, and Turnabout, Wright obtains a tool called the magatama as a gift from Maya Fey. Pearl Fey gives spiritual power to the magatama, imbuing it with the ability to see secrets. During an investigation, if a witness is hiding a secret, the magatama will activate, revealing a certain number of Psyche-Locks. These Psyche-Locks are manifestations of how guarded a witness is, and represent how difficult it will be to get the witness to reveal their secret. The player will need to break each Psyche-Lock by presenting the correct evidence to the witness. If the player presents wrong evidence, they will receive a penalty. If the player receives enough penalties as to completely deplete the credibility bar, the player will have to restart the interaction completely. Once all locks are broken, the witness will reveal their secret, and some of Wright's credibility bar will be restored.

After the release of Phoenix Wright: Ace Attorney, Shu Takumi took a sizable break from the company. When he returned, development for a sequel was greenlit, and Takumi was required to write the game's entire script within three and a half months, which included adding one more case compared to the four in the previous game. Takumi estimated he took about a month to create the scenario for one episode of Phoenix Wright: Ace Attorney, meaning he'd have to drastically speed up the process to complete the game's script. After thinking it through, he realized that he could get it done if he spent one week coming up with the scenario of each episode.[1] To help with the process, Takumi often drank alcohol while writing the script.[2] He eventually managed to finish all five episodes within the three and a half months.[1]

After Takumi had started writing the scenario, a producer called him up to discuss the elements of the game. The producer asked Takumi to add a new element to the investigation parts. Takumi describes coming up with the idea of Psyche-Locks right then and there, describing it as simple enough for his mother to play it, while staying true to the idea of seeing through lies. While the idea came naturally, actually implementing the idea into the game was more difficult, as Takumi had trouble coming up with a visual representation of Psyche-Locks.[3]

During the development of Justice for All, the team was faced with what Takumi described as two major problems. The first was that Miles Edgeworth became exceedingly popular. Due to this, Takumi scrapped the idea of Edgeworth coming back for each case in the second game. This was due to Takumi not wanting Edgeworth to lose to Wright constantly, and bringing his abilities into question. To avoid that problem, Takumi developed a entirely new rival, who would end up becoming Franziska von Karma.[4]

The second large problem was the lack of memory on the Game Boy Advance cartridge. The game was originally envisioned to have 5 episodes, but due to lack of space, this was cut down to only 4.[4] This led to a massive restructuring of the game's plot, and the scrapped case being repurposed as Recipe for Turnabout for the third game, Phoenix Wright: Ace Attorney - Trials and Tribulations.[5]

Justice for All is notable for being the first game to have Janet Hsu head localization. Since then, Hsu has been head translator for every mainline Ace Attorney game. When she began localizing the Ace Attorney series, the first game had already been localized and released. Because of this, the setting of the games was already set, taking place in Los Angeles, California. At the time, Justice for All was not planned to be released to the West, so Takumi wrote explicitly Japanese elements into the game, such as Kurain Village and expanding the Fey clan as an ancient Japanese family of spirit channelers.[6] This left Hsu with a dilemma for translating the game for the West. To justify the non-western elements, Hsu envisioned an America where the California Alien Land Law of 1913 was never passed, so Japanese immigrants could still own land in California.[7] This has led to the world of Ace Attorney being unofficially called Japanifornia by fans and Hsu.[8] 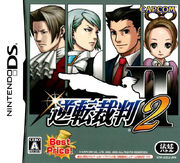 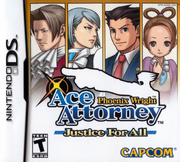 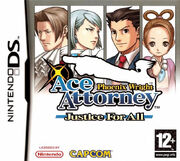