Trials and Tribulations has been ported alongside the rest of the trilogy to several other platforms, including the Nintendo DS, WiiWare, iOS, Android, Nintendo 3DS, Nintendo Switch, PlayStation 4, Xbox One, and Steam. The WiiWare port was released in Japan on February 23, 2010, priced at 1200 Nintendo Points; in North America on May 10, 2010 for 1000 Nintendo Points; and on May 21, 2010 for Europe at the same price.

The game consists of five episodes, which occur chronologically out of order. The fourth episode, Turnabout Beginnings takes place first, followed in-universe one year later by Turnabout Memories, with the remaining episodes being set five years after that.

Bridge to the Turnabout[]

All gameplay elements return from Phoenix Wright: Ace Attorney and Justice for All. There are two phases of gameplay, investigations and trials. During investigations, the player can examine or move to various locations, and talk or present evidence to witnesses. The magatama feature first implemented in Justice for All returns as well. During an investigation, if a witness is hiding a secret, the magatama will activate, revealing a certain number of Psyche-Locks. These Psyche-Locks are manifestations of how guarded a witness is, and represent how difficult it will be to get the witness to reveal their secret. The player will need to break each Psyche-Lock by presenting the correct evidence to the witness. If the player presents wrong evidence, they will receive a penalty. If the player receives enough penalties as to completely deplete the credibility bar, the player will have to restart the interaction completely. Once all locks are broken, the witness will reveal their secret, and some of Wright's credibility bar will be restored.

While developing the story, Takumi had seen the design concept for young Winston Payne in Turnabout Memories, and had the idea for Payne to lose his hair as his breakdown animation. While it looked good, it was hard to see with the court background, and so not to waste the animation, Takumi came up with Payne's breakdown for that case. But another problem had arisen, because now the culprit of the case, Dahlia Hawthorne, had lost the spotlight to Payne. Takumi credits this as the spark that led to the larger idea of the story for Trials and Tribulations, implying that he decided Hawthorne would return in the final case because of Payne's breakdown.[1]

Another similar occurrence happened while the programmers experimented with a new version of the closing credits sequence for the game. The team could take the sprite of a character and place it over any background they had wanted. Takumi then had the vision for a certain scene to take place during the final episode.[1] This scene would become Dahlia Hawthorne's final breakdown, what Takumi describes as the "vanishing point" of the game.[2]

Takumi describes the second case, The Stolen Turnabout, as being inspired by the stories of Edogawa Rampo, specifically Shinri Shiken (The Psychological Test). The episode's concept was "[a] perfect crime meticulously planned by a criminal with a brilliant mind. But it all comes falling down because of one slip of the tongue." Though he still enjoys the case, Takumi was disappointed that he "couldn’t come up with a beautiful answer to the theme of 'the connection between a series of evidence changes completely the following day'."[3]

The concept for Godot's character was to be a an intensely cool and unmovable prosecutor, reminiscent of old hard boiled noir detectives. Godot wouldn't need to have many comedic elements, as he was supposed to be so cool as to make the player laugh. The reason Godot was envisioned to be cool and hard boiled was that Takumi realized that "there are really no cool men in [Ace Attorney]."[3]

Recipe for Turnabout, the third episode, was originally conceived as the fourth case of Justice for All, but was cut due to lack of memory in the Game Boy Advance cartridge. Because of this, there is a single white pigeon among the flock of pigeons in Vitamin Square, a reference to Max Galactica.[4]

Takumi describes the story of Phoenix Wright as a hero story, and so wanted to have Wright experience all cliche hero situations. One of these situations was to have the hero meet their "imposter" - an evil version of themselves. This was the idea for Furio Tigre, an evil version of Phoenix Wright. Takumi thought this idea was missing something, however, and so to fit Ace Attorney's "crazy" world, Tigre was changed to not look at all like Wright.[4]

While working on the game's fourth case, Turnabout Beginnings, Takumi briefly considered making it the first episode as to not confuse players with the game's non-chronological timeline. As well as that, since Takumi ranks the first episode of an Ace Attorney as the most important one, Takumi found the impact of defending someone on death row against a younger Miles Edgeworth "attractive" for the first episode of the game. Yet he eventually settled on the current order of episodes, thinking it the best for the story.[5]

After finishing Justice for All, Takumi states that he already had an idea for the final case of the third game. In it, Shelly de Killer would commit an assassination in front of a fancy hotel, but it's then revealed that he died 17 years prior, and has been channeled by Misty Fey since. This was changed dramatically for the final game, however Misty Fey still appears in the final case of Trials and Tribulations. [6]

Bridge to the Turnabout originally had an outline that was abandoned midway through the development process, as it had a fatal flaw that Takumi couldn't fix. However, due to time running out before the game was supposed to release, Takumi was forced to use the first investigation and trial parts from his original outline. He placed hints and foreshadowing based on instinct, and tried to finish the second half of the case. However, three days before work was set to begin on the second half of the case, Takumi still hadn't come up with anything. Takumi couldn't figure out how to punish the "true culprit", Dahlia Hawthorne.[7] He had already figured out her breakdown, but couldn't connect it to the first investigation and trial. Takumi was then inspired by his own words, Mia Fey's motto of "turning your thinking around". Instead of moving the characters around to fit the hints he had already set up, he would follow the characters' story and what they deemed important. This led to Mia Fey's reveal that Maya had channeled her on the night of the crime to ask for advice, and the ultimate reveal that Maya channeled Hawthorne to protect herself.[2]

Trials and Tribulations has received generally favorable reviews for the Nintendo DS, holding a score of 81/100 based on 45 reviews at the review aggregator Metacritic. Meanwhile, the Wii version holds a Metacritic score of 67/100 based on 9 reviews, indicating mixed or average reviews. The North American Nintendo DS release was a success, with pre-orders more than double of Capcom's estimates, resulting in a shortage of it at both retailers and at Capcom's own online store. In 2010, IGN ranked the game as the 23rd best video game for the Nintendo DS, praising it for its writing and for being an evolution of the point-and-click adventure genre. 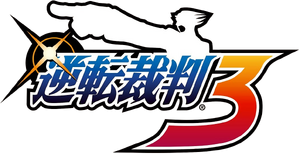 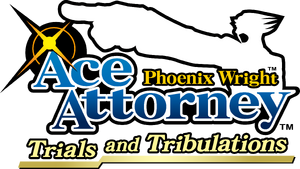 Second key visual for the game 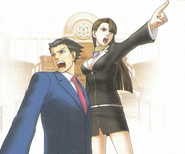 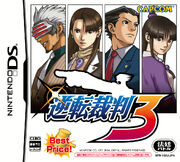 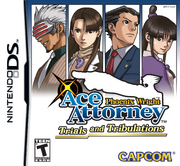 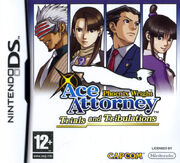