"Starting Blue" is the third ending theme of the anime adaptation of the Phoenix Wright: Ace Attorney Trilogy. It is used in the first half of the second season, corresponding to The Lost Turnabout, The Stolen Turnabout, and Recipe for Turnabout, and comprising the 12 episodes from "The Lost Turnabout" to "Northward, Turnabout Express - Last Trial". The song is composed and arranged by Yuki Utamaru, SHIBU, yuma, and Keita Kawaguchi, and performed by halca, with lyrics written by Junko Miyajima.

The ending sequence starts off with an alarm clock, and is assumed to be ringing, as Maya Fey reaches out to stop it, as she wakes up for the morning. We then get a slow montage sequence of Fey's morning routine, with the screen moving sideways while she brushes her teeth and drinks milk from a carton while looking out her window, as the ED plays in the background. We then get a fast sequence of a close-up of her eyes and feet, which is proceeded by a wide shot of her as she makes a camera gesture with her hands. We then see a montage of photos between Fey and Phoenix Wright, including pictures like them chasing each other, Wright snoozing off on his table proceeded by a photo with a serious look on his face. The last two photos consists of Fey and Wright together, with them eating instant noodles and finally, them putting their fists up in the air.

A blue balloon then passes by the screen, followed by Fey standing in the sky without her acolyte robes, as blue, yellow and red balloons float past her. We then see her cry tears of joy as the lyrics (of the ED) "Cry Cry Cry" simultaneously plays in the background. She then gets rid of her tears as a smile lights up her face. Fey then throws a paper airplane up in the air, which crosses the path between the distant plane in the background. The paper airplane files in the air for a while, before returning back to the ground and in front of Wright. Wright then picks the airplane and looks up to find Fey waving at him from her apartment, now in her robes. The last few frames shows another real airplane, but it instead crosses the opposite path of the previous airplane (going left instead of right) in the distant background seen when Fey threw the paper airplane (which went right), as the real plane is now following the path that the paper airplane Fey threw. 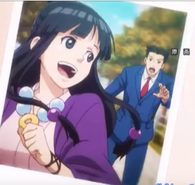 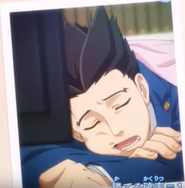 Phoenix snoozing off on his table. 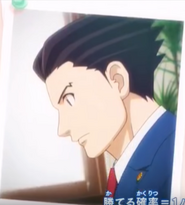 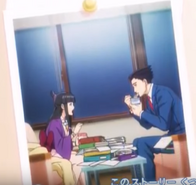 Phoenix and Maya eating together. 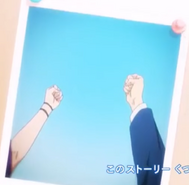 Raising their hands up in the air.
Add a photo to this gallery
Retrieved from "https://aceattorney.fandom.com/wiki/Starting_Blue?oldid=154181"
Community content is available under CC-BY-SA unless otherwise noted.