Shouldn't this article's name be "Police Department", instead of "Police department"? I've notice quite a few times in the game, it is capitalized every time used a proper noun. -- Sam talk 08:58, 12.15.2013

The first and fourth games use lower-case letters to refer to the police department within the script, other than in Rise from the Ashes, where capitalization is inconsistent. I don't recall how the phrase is written in later games, but evidently it isn't used at all in the second and third games. Regardless, I suppose there is a case to capitalize this page, or even rename it to "Los Angeles Police Department". I don't know if that's worth doing, though. Usually when we link to this page, the simple "police department" phrase is used, and since the setting of the games rarely changes, it's obvious which police department we're referring to. It's true that this logic didn't stop me from creating Cohdopian smuggling ring, but the smuggling ring isn't localized to Japanifornia so I don't think the logic applies quite as well. As of late, I've been finding these pages a little on the silly side, anyway. capefeather (talk) 17:50, May 24, 2014 (UTC)

Ah, I should've checked that before, I'm sorry.

Still, I think we should keep it consistent with the name of "Los Angeled Police Department" and use the capitalized letter on the "Department" or, like you said, go with the full name. - Sligneris (talk) 18:49, May 24, 2014 (UTC)

PS: Simarly, I think we should capitalize Detention center, too. That actually should be our policy regarding location names, really...

I think we should have all our location pages in lower-case unless explicitly stated otherwise. As for this page, I think lower-case is better, as it's a synonym for "police force". I don't recall seeing it capitalised in real life... - Strabo412 (talk) 15:57, June 2, 2014 (UTC)

Then again, if we think of it not only as a place, but also as an organization, wouldn't this be pretty much the same as Prosecutorial Investigation Committee or Bar Association? - Sligneris (talk) 16:39, June 2, 2014 (UTC)

My opinion on this is: if it's ever used as a common noun, it can be used as one, and if it can be used as a common noun, it should be. I think it's just simpler this way because locations and organizations alike don't always have proper names (the smuggling ring being the most prominent example). Ironically, in a way, the "default position" of any given term is that it's capitalized unless there's evidence otherwise. So you see Bar Association being capitalized because it's always capitalized in-game, but the prosecutor's office and police department are sometimes used in the lower case. In the first case of the first game, if you say the victim was poisoned, Mia says, "Check the court record. The Court Record button... remember?" This reflects two slightly different usages of the term "court record" that the first game's localization may have originally attempted to establish. Later games seem to capitalize the Court Record all the time. Given how difficult it is to maintain consistency on small details like this across a franchise even when they're somewhat important, it doesn't seem like a reliable way to name wiki pages. capefeather (talk) 18:28, June 22, 2014 (UTC)

To me it still looks ridiculous that way. Police Departament and Prosecutor's Office are the names of locations as well as organizations. Smuggling ring didn't have its official name, like these two, that is why it's different.

Detention Center... also name of the location. While invalid as an actual comparison when it comes to the argument, to me it feels like saying "New york". It hurts even more, because the first letter is still capitalized. 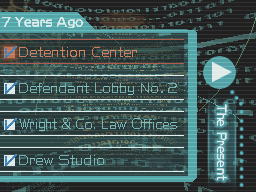 Court Record is also the name of what is a part of the gameplay mechanic, to which the article refers to, not the actual "court records". I firmly believe that the gameplay mechanics, another good example being, say Logic Chess should be fully capitalized. - Sligneris (talk) 08:11, June 30, 2014 (UTC)

I agree that it kind of "looks wrong" to title certain pages in lowercase. Maybe the capitalization of the police department, prosecutor's office and the bar association should be consistent. I don't think one can say that the former two are "official names", though. "Bar Association" probably isn't, either, but the other two at least have evidence of being used like common nouns. I wouldn't count the usage of location names in menus and intros (i.e. the bits that show the location name and current time), either, since everything's capitalized in those contexts.

As for the court record, I suppose I'm operating under the principle that story trumps gameplay when naming these things. I don't know if anyone else agrees with this... capefeather (talk) 19:11, June 30, 2014 (UTC)

Retrieved from "https://aceattorney.fandom.com/wiki/Talk:Police_department?oldid=79812"
Community content is available under CC-BY-SA unless otherwise noted.