The Great Ace Attorney: Adventures (大逆転裁判 -成歩堂龍ノ介の冒險-; lit. "Great Turnabout Trial: The Adventures of Ryūnosuke Naruhodō") is the ninth entry in the Ace Attorney series of text adventure video games. Originally released on the Nintendo 3DS in Japan in 2015, it was ported to mobile phones in 2017. It is also the first half of The Great Ace Attorney Chronicles, released in 2021 for Nintendo Switch, PlayStation 4, and Steam. The game is published by Capcom, directed by Shu Takumi, and produced by Shintaro Kojima. Ace Attorney veteran Kazuya Nuri returns for official art, and the soundtrack is composed by Yasumasa Kitagawa (of Professor Layton vs. Phoenix Wright: Ace Attorney) and Hiromitsu Maeba.

Both games in The Great Ace Attorney Chronicles expand on the 3D environments of previous 3DS titles. In particular, the camera work and animations were treated with special care[1] to help depict Herlock Sholmes's legendary ability to infer details from even the subtlest of movements.[2] For this purpose, actors from the Himawari Theatre Group were brought in for motion capture.[3]

The Chronicles games also expand on the basic investigation/trial formula used in previous Ace Attorney titles, mainly through two major new mechanics. The save screens are also to some extent decoupled from the act structure of the games (e.g. "Investigation, Part 1"). Additionally, unlike previous games, some text graphics in Japanese versions of Chronicles use English translations alongside or in place of some of the Japanese terms, such as "cross-examination" and episode titles.

Chronicles introduces a new element to investigations, known as "dance of deduction" (共同推理 kyōdō suiri, lit. "joint reasoning"). This feature involves Herlock Sholmes using his rapid-fire reasoning to come to a conclusion based on various details that he notices. Naruhodo then has a chance to rebut this train of logic by pointing out flaws and contradictions. The main way of doing so is to inspect an individual or a scene from various angles to find hidden clues that have escaped Sholmes's notice, possibly leading to an entirely different conclusion. Investigations in Chronicles also allow for more in-depth background exploration. Additionally, dances of deduction feature heavy usage of spotlights and flashy poses, in a fashion reminiscent of Ghost Trick: Phantom Detective.[2]

The trial system mixes in elements previously seen in the witch trials from Professor Layton vs. Phoenix Wright: Ace Attorney. This includes the Confidence Icon penalty system from Phoenix Wright: Ace Attorney and cross-examining multiple witnesses at once. Additionally, dialogue resulting from pressing a witness can be interrupted if the player catches a different witness thinking.

The English courts use a jury system involving six jurors and a judge. The jurors vote by launching flaming knives in a firework-like manner onto a set of scales, one side representing a guilty vote and the other representing a not guilty vote. The jurors can change their votes as the trial progresses. If all six jurors vote "guilty", the defense has the right to a "summation examination" in which each juror presents their reasoning for their verdict. This works much like cross-examinations, except the main goal is to point out a contradiction between two jurors' statements, another feature originating in Professor Layton vs. Phoenix Wright: Ace Attorney. Unlike the aforementioned game, there is a button dedicated to this feature, allowing the player to choose any two statements instead of having one already picked out by the game. As a result, jurors may reverse their decisions, and if a majority of them do so, the trial continues.

The court record appears similar to the one used in Phoenix Wright: Ace Attorney - Dual Destinies, with five evidence icons fully visible at a time, though two other evidence slots are visible, partially obscured by the arrow buttons used to scroll through the evidence. The Chronicles release expands this to eight icons being fully visible at a time.

Development of Adventures began a few months after the November 2012 Japanese release of Professor Layton vs. Phoenix Wright: Ace Attorney, when Takumi was asked to start work on a new Ace Attorney game.[4][5] Because the series had become so long, spanning eight text adventure titles up to that point, a more accessible game was desired. One of the concepts that Takumi initially looked to was civil trials, which he ultimately decided would not lead to very clear-cut conclusions. The "dance of deduction" concept that he developed with Herlock Sholmes was one that he had kept in his mind ever since the development of the original Phoenix Wright: Ace Attorney.[2][5] The idea was somewhat vague at first, with Takumi only writing in concept plans, "Sholmes says something strange, and you correct that." The Meiji Japan setting was Nuri's idea, as Takumi originally conceived of the game taking place entirely in London.[3]

The concept was later made into a demo in December 2013 and presented to higher-ups at Capcom, signaling a more concrete notion of how these interactions would unfold.[3] Takumi did not actually expect Capcom to accept the proposal.[6][7] The legal department at Capcom confirmed for him that there would be no problem with using Sherlock Holmes in this manner. Natsume's descendants were also contacted, and they gave permission to use Natsume as a character.[5]

The development cycle of the game was long and difficult due to all of the new approaches to the plot and game mechanics. The plot in particular took more effort than Takumi had anticipated. The last Ace Attorney scenario that he had written in an ordinary setting was the 2007 Apollo Justice: Ace Attorney, and he wanted to make a series that could compete with the original trilogy in terms of quality.[2] The game script was huge and changed drastically multiple times before being finalized in April 2015.[8] This in turn provided a daunting challenge for Nuri and the other asset developers. It was as if no one really knew what the final product would look like.[3]

Nuri designed the graphics to have an illustration-like touch to them and convey the feel of the material of the clothing and other objects of the period. The characters were designed to have a more realistic feel with their expressions and movements, though witnesses and jurors were still more comic-looking to make them more recognizable when sitting next to each other. Nuri had difficulty with designing characters due to the limited selection of clothing and hairstyles available for the period, as well as the need to design so many jurors. He had to bring out their personalities in different ways.[9]

Unlike past games, The Great Ace Attorney Chronicles makes extensive use of camera movements. For the asset designers, this meant that they could no longer get away with skimping on details on characters and settings that would not have been very visible in past games. Keeping the hand-drawn feel of the backgrounds even with camera zooming and movement required putting much more detail into the assets. Despite this, the asset designers pulled through and the assets were finished by the end of 2014.[3]

Jump Festa 2014 featured a playable demo of the game.

Demos of the first and second episodes were shown on Capcom TV by producer Kojima.

On June 3rd, 2015, a playable demo heavily focusing on the dance of deduction mechanic was released on Nintendo eShop.

On April 1, 2015 local time, the official Japanese site for Adventures celebrated April Fools' Day by renaming the game Ken Gyakuten Saiban: Inuhodō Ryūnosuke no Bōken (犬逆転裁判 -戌歩堂龍ノ介の冒險-; lit. "Dog Turnabout Trial: The Adventures of Ryūnosuke Inuhodō") and showing dog-like versions of the main characters. Herlock Sholmes's design as a dog is based on the "Meitantei Holmes" 1984 anime. The first kanji of the title was changed from 大 (meaning "big"/"great"/"large") to the slightly different-looking 犬 (meaning "dog"). Similarly, the first kanji of the Naruhodo surname was changed from 成 (meaning "to accomplish/finish/become") to the slightly different-looking 戌 (the Earthly Branch for the dog). The other characters' names each had a kanji or syllable replaced with ワン (wan, the sound of a dog barking) (Kazuwan Asogi, Susato Mikotowan, Iris Wantson) except Herlock Sholmes, whose name stayed intact. A trailer was also shown, based on the Tokyo Game Show trailer of Adventures.

Since the game was not initially planned for an official English release, in August 2017 a group by the name of "Scarlet Study" released the first English translation patch for the game. The initial patch translated the first case, with subsequent patches released through late 2017 and 2018 translating cases two, three, four, and five. On March 30, 2019, the full patch was released with all five cases translated.

The Adventures soundtrack, The Great Ace Attorney: Adventures Grand Performance Recording, contains 67 tracks on 2 CDs. It was released on July 15, 2015 in Japan, and was rereleased on Steam and Spotify alongside the Chronicles release.

Capcom conducted a character popularity poll[11] that lasted from July 23 to August 7, 2015. Fans voted using Twitter and the characters were ranked based on the amount of retweets they received. The results were posted on the official The Great Ace Attorney: Adventures website.

The Great Ace Attorney: Adventures is the second game in the series in which the number of female culprits outnumber the male ones, following Professor Layton vs. Phoenix Wright: Ace Attorney. It is, however, the first game with this detail to actually have male culprits. 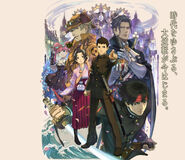 Cover art for The Art of Dai Gyakuten Saiban: Naruhodō Ryūnosuke no Bōken 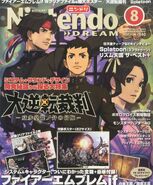 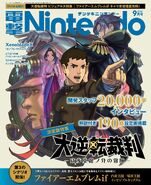 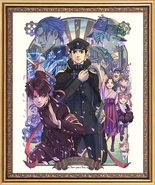 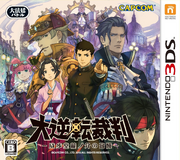 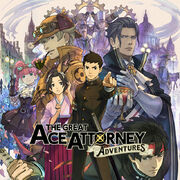