Edit
watch 02:53
GTA: The Criminal Enterprises - The Loop
Do you like this video?
Play Sound

The Great Ace Attorney 2: Resolve (大逆転裁判２ -成歩堂龍ノ介の覺悟-; lit. "Great Turnabout Trial 2: The Resolve of Ryūnosuke Naruhodō") is the eleventh installment of the Ace Attorney series of text adventure video games, originally released on the Nintendo 3DS in 2017. It is the second half of The Great Ace Attorney Chronicles for PlayStation 4, Nintendo Switch, and PC, being the sequel to The Great Ace Attorney: Adventures. Like its predecessor, it is published by Capcom and directed by Shu Takumi, with Kazuya Nuri heading art and Yasumasa Kitagawa composing a large portion of the soundtrack. Its producer is Motohide Eshiro.

Five full-length episodes are available in the game, which follow the events of The Great Ace Attorney: Adventures. Instead of following the "The Adventure of..." naming scheme of the first game (which only the first case does), this game's episode naming scheme is based on the titles of the Sherlock Holmes short story compilations (The Adventures of Sherlock Holmes, The Memoirs..., The Return..., and His Last Bow).

Additionally, in the 3DS version of the game - like Phoenix Wright: Ace Attorney - Spirit of Justice before it - there are two short semi-canonical "what-if" scenarios available to those who pre-ordered the game, referred to as the Ace Attorney Theater.

Due to being directly designed as a "Part 2" to Adventures rather than a standalone story, Resolve technically breaks some previously held conventions about the Ace Attorney franchise, most of which hinge on Resolve being a separate game. For example, some characters who appeared in Adventures become victims or culprits in Resolve.

The gameplay is mostly identical to Adventures, due to being directly designed as a "Part 2". The fingerprint dusting mechanic from previous Ace Attorney titles returns in this game during the events of The Memoirs of the Clouded Kokoro, but otherwise there are no notable differences in gameplay. 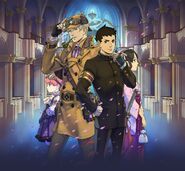 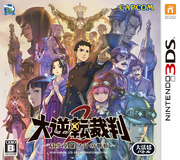 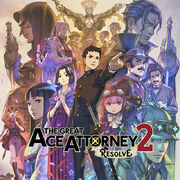