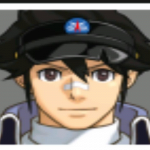 Hi! I'm Apollojustice4all and I'm a new wiki editor! I'm hoping to become important around here, and I'm the one to get people moving in the right direction, so most of my work is in talk pages, and I've  started a lot so far. I don't like to get angry, so I hope we can all get along! If you have any problems just put it on my talk page and I'll respond as soon as possible.

come-on! Isnt it sad enough to know the one you love is dead and on top of it the one who killed her was already put to justice? To top it off, you just woke up from a 5-7 year coma and the one who put you like that you cant see suffer. So, you hide your feelyist of all feels face behind a mask, quit your job, call your old self dead, and get a new, weird name. Oh, and your hair is white. So you fight the spirt of Dahila in order to save your girlfriends sister to make it up to her and you become a villian. You then blame it on the one closest to Dahila, her twin, thinking de'vu, to find out you made an awful chose. As blood seeps through your mask, you say to the girl you saved "The only time when a lawyer can cry is when its all over" as you get brought to prison and get hung, the same way to die as the person who put you in a coma. Please tell me he lived.

Despite being a complete backstabbing fiance', she tecnically killed Pal Meraktis in selfdefence. After being strangled, she was going to be dumped in the river. It was because of Wocky Kitaki she regained consciousness and shot the doctor.

read her page and you'll immediately see why.+Turner Grey was a jerk.

He was so calm to acepe his fate, and tried to kill the girl who put his brother in a coma and him in a wheelchair. He even thanks you for finding out the truth. The fact that he made it out alive is hinted my Edgeworth, where he tells Dick Gumshoe "go easy on him", hinting he avoided the death penalty.

Retrieved from "https://aceattorney.fandom.com/wiki/User:Apollojustice4all?oldid=75295"
Community content is available under CC-BY-SA unless otherwise noted.