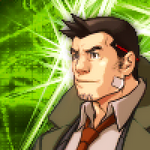 A bunch of people

School
Homework (nemesis)
Yet another bunch of people

Hi people! I'm TeiruFan, otherwise more known as Taniaetc Mostly I'm here for editing grammar (+typos and the like) and adding some info, though 99% of the time, I'm quite useless here :P Or, if needed, I'd do some edit-undoing IF it's vandalism.
I also edit a TINY bit of Digimon Wiki, although times are harder there, so I chose to be more active here instead. I STILL check Digimon Wiki, but only for updates (especially images).
I CAN HARDLY WAIT FOR GYAKUTEN KENJI 2 TO BE RELEASED! I've spoiled myself A LOT... *sigh* I don't care if it comes tomorrow or next year, as long as I CAN play the game localised (I appreciate fan-translations too if the petition isn't enough to convince Capcom into localizing the game.)
I speak Indonesian (despite being my first language, I'm very poor at it), English (what I speak most), and currently learning Japanese (I even have trouble memorising kana, moreover with the kanji, how am I gonna speak and write Japanese fluently?)

Kay Faraday
Same like Gumshoe, only my fav female character.

Shi-Long Lang
It's a rather "funny" case here though. At first, I was all like, "OH MY GOSH HE'S SO AWESOME." After that, when he badmouthed Edgeworth, it literally turned my whole impression upside down. But I decided to delve deeper into his personality, and he is actually a much, much better person than I thought. Stupid me XD

Tyrell Badd
Second fav character (ironically, Gumshoe is also a detective). HE DESERVES WAY MORE ATTENTION FOR BEING SUPER AWESOME (or, if you want some bad language, bada**).

Buddy Faith
Heck yeah! Just because he's a victim, doesn't mean I can't put him as one of my favourite characters!

Retrieved from "https://aceattorney.fandom.com/wiki/User:TeiruFan?oldid=34522"
Community content is available under CC-BY-SA unless otherwise noted.